Participation in the Conference: A democratic Turkey for all

A conference was held on 11 September 2019 at the invitation of PS National Councilors Carlo Sommaruga (Geneva) and Fabian Molina (Zurich) at the Federal Palace in Bern. Our Association has been invited to participate in this conference.

The two main speakers; Honorary President of the People’s Democratic Party (HDP) Ertuğrul Kürkçü and Vice President of the Republican People’s Party (CHP) Yildirim Kaya spoke of a “coup d’etat from above”, which continues for years by the Justice and Development Party (AKP), in power since 2002, under the leadership of current President Recep Tayyip Erdoğan. They pointed out that Europe has failed to become a place of blackmail because of the refugee issue. Kaya and Kürkçü also said that “Turkey wants to go to Europe. For that, we need your support. Europe must no longer remain silent about the repression in Turkey “.

“Political conflicts must be resolved through dialogue and negotiations geared towards solutions, not violence,” said PS National Councilor Fabian Molina. “Switzerland must play a more active role than before.”

All speakers criticized the testimony of the HDP mayors of Diyarbakır, Mardin and Van by the Turkish Minister of the Interior on 19 August, as well as the purely political condemnation of the presidents of the Istanbul CHP, Canan Kaftancıoğlu , to more than nine years in prison for a simple Twitter message.

Participants at the conference called on Switzerland to make a greater commitment than in the past to end the violence and respect democracy, the rule of law and human rights in Turkey. 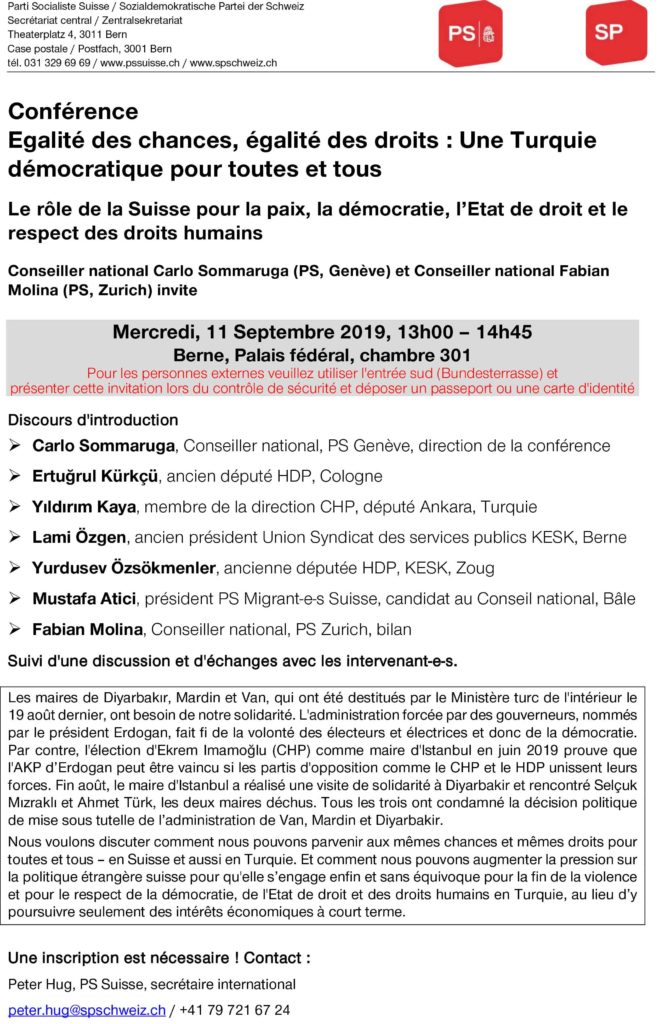