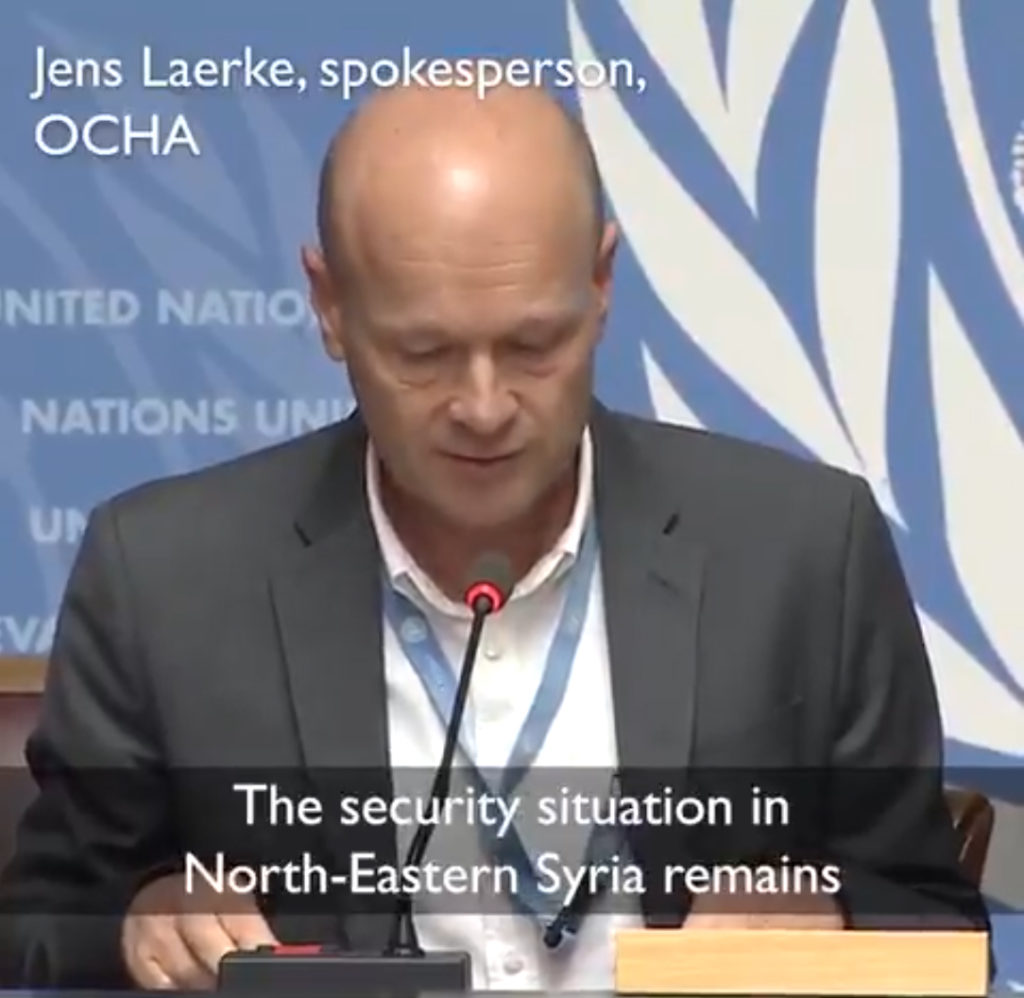 Amid ongoing fighting in northern Syria and disturbing reports that extrajudicial killings have been streamed online, the United Nations and their partners are continuing to deliver humanitarian supplies to tens of thousands of people displaced by the violence, UN agencies stressed on Tuesday.
Briefing journalists in Geneva, Jens Laerke from the Office for the Coordination of Humanitarian Affairs (OCHA) described the security situation in northeast Syria as “highly volatile”, with continuing reports of airstrikes and ground attacks linked to Turkey’s military incursion.
“On both side of the border, civilian deaths are being reported”, Mr. Laerke said.
To date, at least 160,000 civilians have been displaced since the offensive began last Wednesday, according to UN figures, with hospitals and schools and other public infrastructure hit or affected by the fighting.
UN will deliver ‘until it becomes impossible to do so’
Highlighting the commitment of the UN and its partners to “stay to deliver until it becomes absolutely impossible to do so”, Mr. Laerke noted that the organization continues to operate out of the town of Qamishli for the time being.
“The United Nations remains in Qamishli along with our staff,’ he said. “But we have seen of course that in some areas where there is active fighting, it is for obvious reasons, impossible to go there. And aid is being redirected towards areas where those who can help are moving.”
Echoing that message and at the same appealing for security guarantees for all humanitarians, Herve Verhoosel, spokesperson for the World Food Programme (WFP), said that 130,000 people “will receive food soon because that’s already (been) dispatched”.
Of that number, 83,000 have already received food, he added, noting that it “is arriving where the people need it the most”.
Airstrike reportedly responsible for civilian, journalists’ deaths
Although the civilian toll is unclear, given the difficulty of verifying information in a conflict zone, Marixie Mercado from UN Children’s Fund, UNICEF, confirmed the deaths “of at least four children and the injuries of nine in north-east Syria”, along with seven other youngsters in Turkey.
Another incident – reportedly linked to a Turkish airstrike on the Tel-Tamor to Ras al-Ain Highway, on Sunday 13 October – resulted in the deaths of four civilians including two journalists, UN human rights office, OHCHR, said.
“The worst incident we are aware of so far, which we are still seeking to fully verify, is a report that at least four civilians, including two journalists, were killed and tens of others injured when a convoy of vehicles was hit by a Turkish airstrike,” OHCHR spokesperson Rupert Colville explained.
Inside Turkey, the authorities reported that 18 civilians have been killed since the conflict escalated last week, Mr. Colville added, “including a nine-month-old baby, by cross-border mortar and sniper fire by Kurdish fighters”.
Disturbing video footage has also emerged of what appear to be executions on another highway that were then streamed online, by forces linked to the Turkish military.
“We have received reports and viewed two separate pieces of video footage showing what appear to be summary executions carried out by fighters belonging to the Ahrar Al-Sharqiya armed group, which is affiliated with Turkey, on 12 October,” Mr. Colville explained.
“One of the videos – both of which have been widely shared on social media – seems to show the fighters filming themselves capturing and executing three Kurdish captives on the Al-Hassakeh – Manbij Highway…Only one of the captives appeared to be wearing military uniform.”
The UN human rights office has also received reports indicating that a well-known Kurdish female politician, Hevrin Khalaf, was also executed on the same highway, allegedly also by Ahrar al-Sharqiya fighters.
Under international law, summary executions are serious violations, OHCHR said in a statement, and may amount to a war crime.
Around 70,000 children displaced: UNICEF
At least 170,000 children could need humanitarian assistance as a result of the violence, UNICEF’s Ms. Mercado added, noting that 70,000 children have been displaced since hostilities escalated last week.
Most have sought shelter with relatives, friends and host communities, but there are also 33 collective shelters “mostly schools and unfinished buildings” across Al Hasakeh city, Raqqa city and Tal Tamer, Ms. Mercado said.
They host around 3,400 people “but the numbers fluctuate quickly as most people do not stay long”, she added, while OCHA’s Jens Laerke noted that the organization was providing aid there.
“We heard about 33 shelter points further to the south in Al-Hassakeh; so, of course we try to move aid to where people are,” he said.
WHO confirms further deliveries of medical supplies
Underscoring the impact of the conflict on already weakened health services, the World Health Organization (WHO) announced that 40 tonnes of medical supplies would be dispatched to Qamishli later on Tuesday, to complement the nearly 15 tons of life-saving aid that reached the city’s National Hospital on Monday.
Elsewhere, in the embattled northeast, “the national hospital in Ras Al-Ain is currently out of service and the national hospital and two health centres in Tel Abyad are also currently non-functional”, WHO spokesperson Tarik Jasarevic said. “Health facilities in camps hosting displaced people in Mabruka, Ain Issa and Ras Al-Ain were also evacuated, with additional facilities under threat as the conflict rapidly moves forward.”
In Al-Hol camp, where about 64,000 children and women are housed – some with suspected links to ISIL fighters – the WHO spokesperson noted that the three field hospitals had reduced their services since 12 October, because the hostilities had impeded the access of health staff.
https://news.un.org/en/story/2019/10/1049241
Share